This page has (hopefully) the latest information about how to build Android for x86 platforms . The built images runs well on a real hardware as well as virtual machines (qemu or virtual-box or vmware-workstation).

Now it is very easy to compile Android for x86 platform from our girepositories. You need not to apply any patch. Just follow the below instructions.

The Android-x86 and Android build is routinely tested in-house on recent versions of Ubuntu LTS (14.04 or 15.10),but most other distributions(fedora ..) should have the required build tools available.

Before you download and build the Android-x86 source code,ensure your system meets the following requirements:

A Linux or Mac OS system（maybe）. Certianly it is also possible to build Android-x86 in a virtual machine(not recomend) on a unsupported systems such as Windows. If you are running Linux in a virtual machine,you need at least 16GB of RAM/swap and 100GB or more

of disk space in order to build the Android-x86 tree. See disk size requirements below.

A 64-bit environment is required for Gingerbread (2.3.x) and newer versions,including the master branch. You can compile older versions on 32-bit systems.

At least 100GB of free disk space for a checkout,150GB for a single build,and 200GB or more for multiple builds. If you employ ccache,you will need even more space.

JDK 7 to build the master branch of Android in the Android Open Source Project (AOSP); JDK 6 to build Gingerbread through KitKat; JDK 5 for Cupcake through Froyo. See Initializing a Build Environment for installation instructions by operating system.

Choosing a Branch on Android-x86 Tree

Some of the requirements for your build environment are determined by which version of the source code you plan to compile. A listing of branches you may choose as below.

Based on Android 6.0 release (Marshmallow ).

Based on Android 5.0 release (Lollipop).

Based on Android 4.4 release (KitKat).

Based on Android 4.3 release (Jelly Bean).

Based on Android 3.2 release (Honeycomb).

Based on Android 2.3 release (Gingerbread).

Based on Android 2.2 release (Froyo).

Based on Android 2.1 release (Eclair).

Based on Android 1.6 release (Donut).

Based on Android 1.5 release (Cupcake).

Once you have selected a branch,follow the appropriate instructions below to set up your build environment. Good luck !!!

Setting up a Linux build environment

These instructions apply to all branches.

The Android-x86 build is routinely tested in house on recent versions of Ubuntu LTS (14.04 or newer version),but most distributions(fedora20 or newer) should have the required build tools available. Reports of successes or failures on other distributions are

For gingerbread-x86 or higher versioin, Note a 64-bit environment is required. Older versions can be compiled on 32-bit systems.

NOTEThe complete list of hardware and software requirements see above Some

If you encounter version errors for Java,set its path as described in the Wrong

To develop older versions of Android-x86,download and install the corresponding version of the Java JDK and see Install-Oracle-Java-JDK-on-Ubuntu-Linux.

You will need a 64-bit version of Ubuntu. Ubuntu 14.04 is recommended.

Note The source tree you will download include 2 part,the first part is the projects created or modified by android-x86 on our git server and all

the other projects still point to AOSP. some details about projects information can be find in 'default.xml' file .repo/manifests/default.xml.

the source and the date they were made. This document describes how to download the source tree for a specific Android-x86 branch.

Repo is a tool that makes it easier to work with Git in the context of Android. For more information about Repo,see the Developingsection

1. Make sure you have a bin/ directory in your home directory and that it is included in your path:

Download the Repo tool and ensure that it is executable:

After installing Repo,create an empty directory to hold your working files,Give it any name you like:

Run repo init to download the latest version of Repo with all its most recent bug fixes.

$ repo init -u git://gitscm.sf.net/gitroot/android-x86/manifest -b $branch

Where $branch is any branch name described in the previous section. This will point the projects created or modified by android-x86 to our git server. All the other projects still point to AOSP.

To pull down the Android-x86 source tree to your working directory from the repositories,run:

How to build a image see below.

The following instructions to build the Android-x86 source tree apply to all branches. The basic sequence of build commands is as follows:

Initialize the environment with the envsetup.sh script. Note that replacing source with . (a single dot) saves a few characters,and the short form is more commonly used in documentation.

You need to choose a target for the x86 device you want to use/test. We provides several targets for different branches:

asus_laptop: for some ASUS laptops

asus_laptop: for some ASUS laptops

Actually,for historical reason,you have to use eeepc for a generic x86 PC,notebook or netbook before (includes) donut-x86 branch. Since eclair-x86 branch,eeepc is changed to serve ASUS EeePC family only. Do not use it if you are not using an EeePC.

Since jb-x86 we tried to use android_x86 as a universal target for all x86 devices. However,it may not optimized for a particular target device. If you are a developer,you can create a target based on android_x86 for your device.

If you want to add new target for your x86 device,refer to the article.

Now you can select a target by lunch command:

where $TARGET_PRODUCT is any target described in the previous section,and possible values of $TARGET_BUILD_VARIANT are eng,user,userdebug. For example:

Then you can build by m command( m command is equivalent to make,but you can use it in any subdirectory of the android-x86 tree.

Note:there are 2 types of images we can build using make (iso_img or efi_img):

iso_img: Creates an ISO9660 image,which can be write on cd/dvd medium / USB flashdrive.This is bootable by machines supporting legacy BIOS.

efi_img: Creates an image bootable on EFI machines (some new devices like tablets only support this booting method currently)

Since froyo-x86,we also add menu selection to lunch command. Just type lunch,and you will get a list of available targets. Choose a target by inputting its number. Alternatively,just type lunch $number.

To build a live cdrom iso image for target android_x86,type:

To generate a live cdrom iso for tegav2,type

Then you will get an iso file out/target/product/x86/android_x86.iso,etc.

If the computer you build on has more then one processor or core,you can take advantage of multiprocessing (or make jobs) by adding -jX to the beginning of your make command:

Replace X by the number of processors you have. For example,if you have a quad core CPU,replace X with 4:

You can create a buildspec.mk in your android-x86 directory to remember a particular target product you

With your buildspec.mk file in your android-x86 directory,you can just make by

If you have squashfs-tools 4.0 (older version will not work) installed in your host,the generated Android core filesystem will be compressed by squashfs. So the iso file is very small (only about 30-40%). If you hope to disable it,add USE_SQUASHFS=0 to make.

You can put it to buildspec.mk:

Before froyo-x86 (included),If you hope to get a more smaller image,you may remove the debugging symbols by adding

Since gingerbread-x86,the debugging symbols are stripped by default. Do not use this option anymore.

The generated image is located at

You can easily test the iso file by a virtual box,vmware workstation or qemu.

Of course you can burn the iso to a CD disk and test it on a real hardware. On booting it will automatically detect your hardware and load necessary modules. If you have problem with the default frame buffer driver,you may try the VESA mode (select second

Since honeycomb-x86,we supports the hybrid iso format. That is,the iso could be dumped to a usb disk directly. You may create a bootable USB disk by

where /dev/sdX is the device name of your USB disk. This feature is only available for iso files released after 2011/12/25. Note usb_img is deprecated.

Do not use it anymore.

Android-x86 includes an option to install to harddisk via easy installer. The supported filesystems are:

You can install Android-x86 to an NTFS filesystem to co-exist with Windows. See the Advanced section below for details.

Burn the iso image to cdrom or you can create a bootble USB stick(recommended- you known it is environmental protection).see the Advanced section below for details.

Boot OS from the Android-x86 installation CD/USB,Choose the 'Install

Android to harddisk' item as show below： 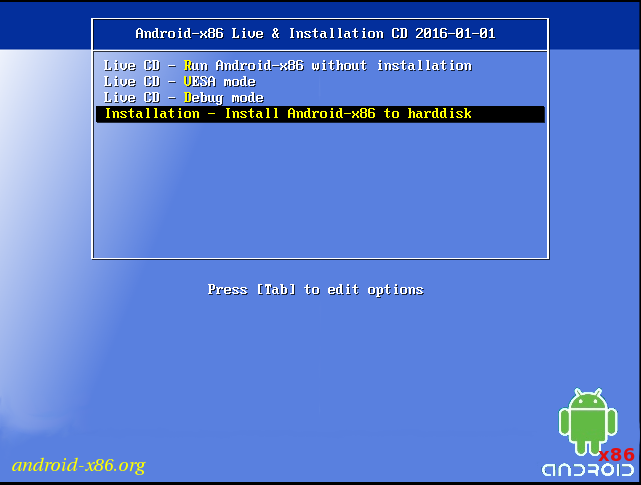 After seconds of booting,you will see a partition selection dialog. You can choose an existing partition to install Android-x86,or you can create or modify partitions by choosing 'Create/Modify

partitions'(here use cfdisk tools). Note you can install Android-x86 to an external disk like USB drive. If the target drive is not shown,try 'Detect 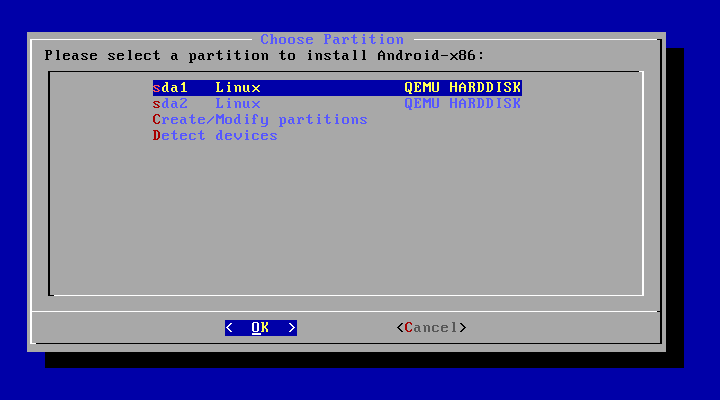 Android-x86 can co-exist with other operating system or data in the chosen partition. If the partition is formatted,you may choose 'Do

not format' to keep existing data. Otherwise,choose a filesystem type to format.

Note: The type you chosen must match the partition ID or the boot loader will fail to boot. Also note if you choose to format to fat32,

you will see a warning that android cannot save data to fat32. You can still proceed to install,but the installed android system will work like a live cd system. That is,all data will lose after power off. But it

has been improved to save data to fat32 or ntfs since 2010. The installer will ask to create a data.img to

save data when fat32 or ntfs is chosen.

installer only creates boot items for Android-x86. If you hope to boot other operating systems,you need to add the item to /grub/menu.lst manually.

See the Advanced Section below for how to do this.

If you are lucky,the installation will begin,and you will see the progress bar.

While you see this screen,the installation is complete. Congratulations! Now you can run Andrond-x86 directly,or you can reboot and run it.

Use the USB image

Download the compressed USB image,uncompress and dump it to a USB stick.

On a Linux host,you can use the command:

Note where /dev/sdc is

the device name of the target USB disk. However,some broken BIOS may fail to boot such a USB disk.

On a Windows host,you have sevral choices like Win32DiskImager or USBImageTool ,

and what you want.

There are some open source tools that can convert an iso into a bootable USB disk:

To boot other operating systems,you have to add boot items for them to /grub/menu.lst. For example,to

This assumes the Windows is installed to the first partition of the first hard disk. Or you need to change rootnoverify to the appropriate

When using Android-x86 as a VMware guest OS you must change your virtual disk type to be IDE. The default type in VMware is SCSI,and Android-x86 kernel is not configured to support SCSI.

Choose the hard disk and remove it.

Add a hard disk to create a new virtual disk,then you can choose IDE as your virtual disk type.

When finished,you can install Android-x86 normally.